Delivery Man finds itself with tough competition this January as many “Oscar-tipped” releases take all the headlines however this enjoyable comedy has its own shining elements that shouldn’t be overlooked. Starring Vince Vaughan it follows a funny inventive storyline that evolves into an even funnier and heartfelt comedy that’s easily watchable, fun and entertaining. Delivery Man isn’t anything special but it has enough gags and laughs to make it well worthwhile.

Vince Vaughn is David Wozniak a less than average man who works as a delivery driver at his family’s business the Brooklyn based Wozniak Meat Store. Irresponsible, unreliable and lazy David is wasting away his life and finds himself in over his head with debt and clutching at straws in his struggling relationship with “girlfriend” Emma (Cobie Smulders). However when he comes home to a surprising visitor his life gets turn upside down after being given unimaginable news that he is the biological father to 533 children. David might not be the best at delivering meat or even life itself but as he soon finds out he was very good at delivering quality sperm. As a young man David earned money as a sperm donor and a mix up at the clinic meant that his deposits fathered all 533 children that year, 20 years later 143 children have filed a court-case demanding the true identity of their father to be revealed.

David soon decides that he wants to turn his life around and be there for each and every one of his children. Given a file containing all 143 profiles he randomly one by one starts making up for a lot of last time and acts as their guardian angel. Not telling them he’s their father and the famous “Starbuck” donor he manages to bond special relationships. However as his debt crisis worsens and his relationship is put under more pressure David soon finds himself facing a number of dilemmas that could affect everything.

Delivery Man certainly has an eye-catching and entertaining storyline which meets expectation.  The plot throughout stays Interesting due to a number of twists and turns as David is faced with problem after problem. However the highlight of this comedy is the high maintenance of humour throughout with jokes and gags almost being constant. What is also great and most refreshing is how Delivery Man pauses to become more serious and heartfelt at times providing a great balance between the two. The main catalysts behind the laughs are David himself and his best friend/lawyer Brett (Chris Pratt) who together combines to make great comedy from physical to scripted.  Delivery Man also has a lot of heart to balance out that humour, mainly achieved by a well-written script. The relationships formed between David and his kids alongside the different characters and personalities met provide a wide range of emotions from being completely hilarious to quite heart-warming.

Not so many years ago Ken Scott and Martin Petit teamed up to make Starbuck a critic’s choice “hit” which became a popular film but only for a limited audience. Ken Scott’s Delivery Man is his solo effort of an American remake with the hope that it becomes a well-known name. I have to admit I was slightly disappointed to discover this wasn’t a totally original story but knowing that it came from the same brains behind “Starbuck” is some consolation and his second shot should definitely be applauded. The story is great, originally hinted and rumoured to be similarly based on a real life case, however it’s unique and humorous providing great entertainment. 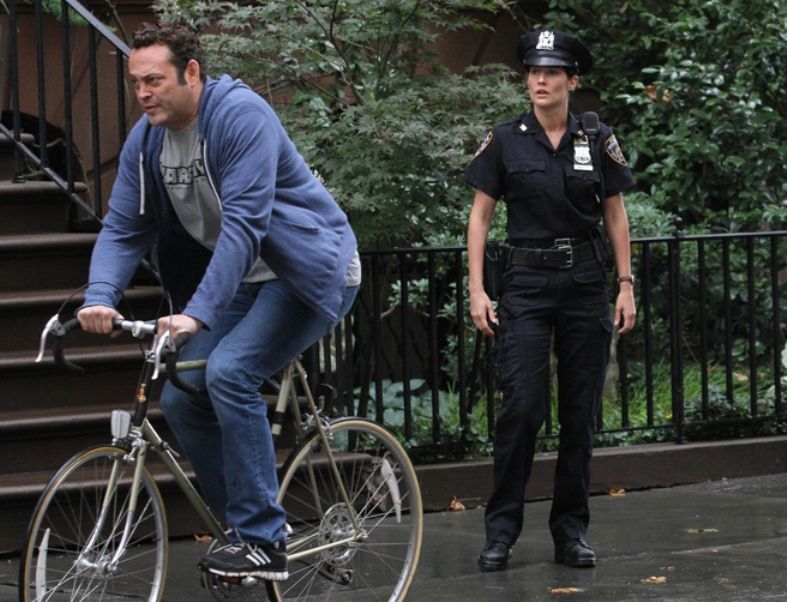 The real downside however to Delivery Man was the trailer and how it included the funniest scenes and gags meaning there was a lack of surprises and laugh-out-loud moments upon viewing leaving us with only a few gut-busting laughs. The combination of the great story, good acting and well written script however saves Delivery Man from falling into that group of failed comedies. Guaranteed laughs and an entertaining enjoyable watch Delivery Man shouldn’t be overlooked this January.

Director: Adam McKay
Writers: Will Ferrell, Adam McKay
Staring: Will Ferrell, Steve Carell, Paul Rudd, Christina Applegate
Rating: ★★★★
Anchorman is possibly the godfather of the current “teenage” generation, sad but true. It’s hugely hilarious with an amazing well known cast also featuring many cameo performances from comedy stars I will not mention. Set in a news station it stereotypes and mocks what happens on the news, from those cheesy smile credits to the friendly chats after the sign off. It takes an opportunity to show the viewers what they might not see on the news, behind the cameras, but of course this is a comedy and you can’t believe everything you see on TV.
The story focuses on San Diego’s popular news Anchor Ron Burgundy (Will Ferrell),
He’s a master of the jazz flute, winner of 5 Emmy’s and has a woman as a co anchor, wait did someone say Women! Trouble arises as manager Ed Harken (Fred Willard) decides he wants some diversity and hires Veronica Corningstone (Christina Applegate), who aspires to be a network anchor. Scared cause “their menstruation attracts bears” the act of sabotage begins from the San Diego news men but the woman fight back.

The male news team consist of very well known comedy actors, Steve Carell plays  Brick Tamland, the weather man with a grenade in his pocket. There’s also Brian Fantana and Champ Kind (Paul Rudd, David Koechner) and the four together occasionally go suit shopping and sing afternoon delight. It would be boring eventually and unfair to get all the laughs in this film from mocking the stupidity of the news team. So Anchorman focuses on Ron Burgundy and Veronica. They get close and into a relationship, taking trips to pleasure town but when work gets in the way they turn bitter and their actions have costly consequences and Ron loses his job, will Ron and Veronica get back together and things go back to usual? Stay tuned San Diego.

The laughs in this film are big and there are plenty off them. Some films go too far and try too hard for laughs being somewhat stupid and silly, however despite Anchorman doing this, they do it well and you can’t stop yourself from laughing. As mentioned before there are a number of cameo performances from other well known comedy actors, they all meet in a Network standoff free-for all and well things escalate quickly. I love this film like I love lamp and scotch, you’ll find yourself laughing and eventually quoting it every time you put it on and I personally think its the best comedy in the last decade for sure. If you haven’t already seen Anchorman you’re missing out, it’s definitely a must watch comedy.

Genre: Adventure, Biography, Drama
Director: Sean Penn
Writers: Sean Penn (screenplay), Jon Krakauer (book)
Staring: Emile Hirsch, Marcia Gay Harden, Vince Vaughn, Kristen Stewart
Rating: ★★★★½
Into The Wild is a film that’s based on a true story and an adaptation of a book, Sean Penn captures every bit of emotion possible creating an inspirational, beautiful, sad and influential film that you will always remember. Words won’t do justice to just how good a storyline this film has, the fact it’s based on a true story just adds to the emotion and wonder. It has a fantastic crew that shows when looking at the film from the technical point of view, it also features a cameo of all star actors and actresses from Vince Vaughn to Kristen Stewart.

Emile Hirsch plays the character of Chris McCandless a young man who has it all, youth, wealth, intelligence but it isn’t what he wants, he just wants to live to be out there. After graduating from Emory University with straight A’s he abandons his old life, his possessions, his car, he gives his complete $24,000 savings to charity and decides to hitchhike his way to Alaska to live in the wild as Alexander The Supertramp. He rebels against his demanding snobby parents (Marcia Gay Harden, William Hurt) and leaves his bewildered sister (Jena Malone). On the way of his great adventure he meets some extraordinary and different characters that shape his new life.

The film skips between Chris in Alaska at the end of his adventure to how he got there and the lessons he learnt and the people he met, finally they meet and the film follows the present day. The characters he meets all vary givin

g not only Chris advice but you feel the audience life lessons. He meets the characters middle aged “hippy” couple Rainey and Jan (Brain H. Dierker, Catherine Keener) to the likes of an old man Ron (Hal Holbrook) not only is it inspirational and heart warming but the relationships and bonds formed are truly heart warming.
Sean Penn has adapted the book very well, staying close to the original source. He was helped along the way in creating this wonderful film by an excellent crew, credit should be given for a inspirational mood setting soundtrack by the sound department. The acting was outstanding, Emile Hirsch adapted very well not only mentally but physically to play the character of Chris McCandless, for me it’s one of my favourite performances in the last decade. All in all Into The Wild is a must watch film, not only is it a inspirational story but a serious one about a boy who was lost due to his desire to live. It deserves its status as the 165th best film of all time and its many wins and nominations, don’t miss out.