It recently occurred to me how the films that I have been watching lately have had brilliant soundtracks and ones which I have been listening to over and over again. So here is a list of my personal favourite film soundtracks.

I re-watched the Tarantino Classic Reservoir Dogs not so long ago and it once again reminded of how brilliant the all 70’s soundtrack is which sees “Stuck In The Middle of You” be played in time to Mr Blonde cutting someone’s ear off. Sticking with Tarantino it is only fair to mention Pulp Fiction which sees some unconventional songs such as “Jungle Boogey” turn into a classic moment.

500 Days of Summer also holds one of the best soundtracks which is one of the main highlights to the unusual non-stereotypical rom-com, with song “Sweet Disposition” constantly being in your head after. Similar film Juno also brings to the table a very up-beat warm soundtrack that again is a highlight and credit to it’s film. 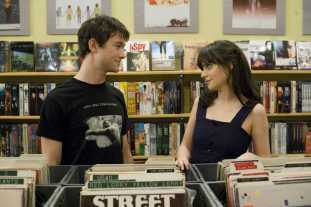 Most recently in cinema’s both Inside Llewyn Davis and Her have produced amazing soundtracks which I have not stopped listening to as well as a high standard to 2014 films. Inside Llewyn Davis really shows off folk music and Oscar Isaac’s talents whilst Her’s mixture of synthetic scores and songs such as “The Moon Song” is just beautiful and rather complimentary to Spike Jonze’s creation.

Do you agree? What are your personal favourite soundtracks?

500 Days of Summer is a romantic comedy that isn’t Hollywood and fairy tales but harsh, painful and realistic but at the same time heart warming. Tom (Joseph Gordon-Levitt) believes in love and when seeing Summer (Zooey Deschanel) he believes she’s “the one” however Summer doesn’t believe in true love, despite this the two get close together and become more than friends but problems arise when Tom wants to put “labels” on their relationship. The film shows 500 days from the moment Tom first saw Summer, flicking and skipping through the days back and forth to show how things changed and how things were before.

Tom designs greeting cards but his true passion is for architecture, one day at work at a monthly meeting Tom meets newly arrived assistant Summer, and then and there falls for her. This sets up the scenes where he hopelessly tries everything to talk to her, and for her to notice him representing something many in the audience can relate to. Eventually after some not so smooth conversations Tom and Summer become friends, but it soon develops into more than just friends.Kissing in the photocopying room, endless cinema dates and even shopping in Ikea makes Tom fall even more for

Summer but he soon crashes as Summer tells him that she’s don’t want things to get serious and to keep it casual. Despite this their relationship still develops and slowly but surely Summer lets Tom into her hidden away mysterious life that no one has ever had the privilege to see and hear about before. However their heart warming cute relationship that everyone in the audience would want suddenly takes a u-turn and the two break up. The rest of the film consists of how Tom copes without Summer however she does return later in the film but is it for the good of Tom?

The film in a unique way shows how something can change so quickly and the harsh reality of relationships and love, something that other romantic films cover up and stray away from. There are two scenes that will stick in your head after watching, the “Ikea scene” is heart warming and is a real “awww” moment within in the audience. The second is the “expectation vs reality scene” that is truly unique but represents real life as its something everyone can relate

to as we tend to make up scenes in our heads of how we hope events turn out. The film not only provides us with the generic expectations of a romance film but those of a comedy too, helped by Tom’s friends (Geoffrey Arend, Matthew Gray Gubler)there are many scenes that will make you laugh for a number of different reasons.

Not only does 500 Days of Summer have a great storyline and plot but it is also accompanied by great acting and a even better soundtrack. The soundtrack is modern and refreshing, featuring songs such as Sweet Disposition (The Temper Trap) and She’s got you high (Mumm Ra) it complements the feel and style of the film, completing it. This is definitely one of the best romantic comedies that has been released for a while and one to watch.